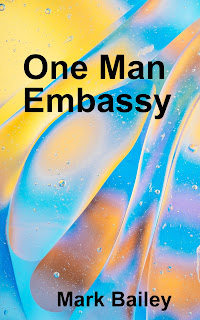 One Man Embassy by Mark Bailey has been published. What's it about?


Forced to flee his home planet Jhanya during a violent revolution, Hequa steals a spaceship and makes his way to Earth. Here, on an unfamiliar world with alien customs, he tries to make a life for himself. Aided by technology from Jhanya and hindered by the absence of identity documents, Hequa finds work as a panhandler, a stage magician, and a manufacturer of rare items. Eventually, he opens Jhanya Embassy, where he shares the wonders of his home planet with the people of Earth.

You can buy One Man Embassy for Kindle on Amazon and in print via blurb.